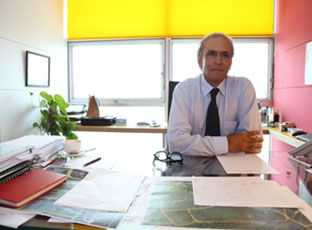 After qualifying in Architecture from the University of East London in 1978, Mr. Parvez Ansari started his career initially in Vienna, Austria, but subsequently joined a multi-disciplinary Design Consultancy based in London. In 1984, he joined hands with Mr. Khawar Ghani to form Ghani Ansari Partnership, Chartered Architects.

Mr. Ansari has been serving EA as the Head of Architectural Department. The practice over its 25 years has been responsible for major jobs ranging from Hospitals, Interiors, Clubs, Schools and Universities to Large Office and Industrial Developments, having been the recipient of a number of prizes in Architectural Competitions. He has also been a consultant for the UNDP on Conservation projects in Samarkand and Bokhara, Uzbekistan.